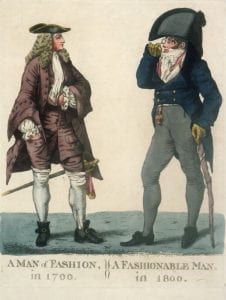 2. What country produces the most socks?

The township-level district of Datang in the city of Zhuji in Zhejiang Province, People’s Republic of China, has become known as Sock City. The town currently produces 8 billion pairs of socks each year,[9] a third of the world’s sock production, effectively creating two pairs of socks for every person on the planet in 2011.

3. Why did Albert Einstein hate socks?

Albert Einstein was certainly known for being eccentric. One such eccentricity was the fact that he despised socks and was proud to tell anyone that would listen that he gave them up at a young age. He claimed that not only did he not see the point of wearing both shoes and socks, but he said it annoyed him that his socks would form holes because of his extra large big toes.

4. What is the design on the side of a sock or in the ankle region called?

It has been called a clock-This has been the case since the 16th century, but the origin of the name is uncertain.

Nobles and kings alike sported knee-high stockings as a way to express their financial and class standing because, like many belongings, the silkier the material, the wealthier you were. For some time, presenting stockings to important people was seen as a generous (and much welcomed) gift, which may just be why socks are popular at Christmastime.